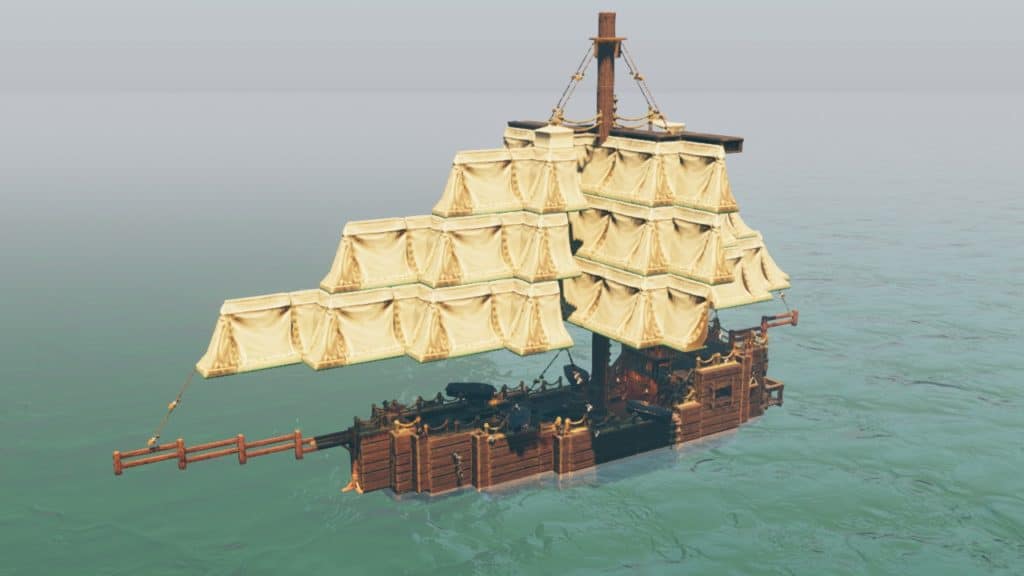 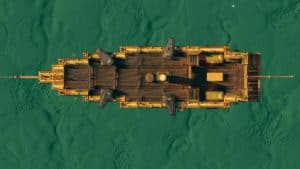 Armor Class 15 Hull
Hit Points 175 (50d6)
Speed 45 ft., 15 ft. while sailing into the wind; 60 ft. while sailing with the wind. Once the Sloop gains a velocity, it maintains that velocity until it takes the “Change Course” action.

Once the harpoon has attached itself to a creature or object, the target is grappled. As an action, the sloop-of-war can instead winch the harpoon, pulling the smaller of the two closer to the larger. This winch works at a speed of 20 ft. per round.

A Sloop-of-War is a small, nimble ship designed for a crew of six or fewer. It is frequently used by smaller shipping companies, pirates, or in retinue of a larger, less maneuverable ship.

A Sloop-of-War has the following features:

Ceilings. The ceilings in the lower deck, holds, and cabins are 8 feet high with 6-foot-high doorways.

Doors. The ship’s doors are made of wood and have AC 15, 18 hit points, and immunity to poison and psychic damage. A lock can be picked with a successful DC 15 Dexterity check made using thieves’ tools, or the door can be forced open with a successful DC 20 Strength (Athletics) check.

Rigging. Rigging on the ship can be climbed without an ability check.

Sails. The ship has three 40-foot-tall masts with sails to catch the wind.

A sailing ship requires a crew to properly sail the vessel, fight battles and fire the siege weapons.

If the characters are guests on a sailing ship or warship, the crew consists of the following creatures, all of which have proficiency with water vehicles in addition to their normal statistics:

The main deck of the ship has the following features:

Cannons. The main deck four cannons, with two on each side. Each has a range of motion of 120 degrees.

Cannonball Barrel. This barrel is on the center of the main deck, located 10 feet from each cannon.

Hatch. A covered, 10-foot-square opening leads to the lower deck.

Railing. The main deck has a 3-foot-high rail around its perimeter that provides half cover for Medium creatures and three-quarters cover for Small creatures behind it.

Six beds are stacked in the cabin quarters, with three on each side. The crew sleeps in shifts so someone remains on duty to command the crew and carry out the captain’s orders.

The quarterdeck has the following features:

Railing. The quarterdeck has a 3-foot-high rail around its perimeter that provides half cover for Medium creatures and three-quarters cover for Small creatures behind it.

Wheel. The ship’s wheel stands at the aft of the quarterdeck.

The forecastle has the following features:

Harpoon. A harpoon launcher is attached to the deck. A harpoon and 60 feet of hempen rope is secured nearby.

Figurehead. Some sloops will have a wooden figurehead at the front of their forecastle, often shaped to look like a fearsome sea predator. This figurehead serves as the ship’s naval ram.

Railing. The forecastle has a 3-foot-high rail around its perimeter that provides half cover for Medium creatures and three-quarters cover for Small creatures behind it.

This area houses cargo, crates and barrels of food and water, and other supplies.